The package contains the binary of the temporal learning algorithm described in the article "New Approach on Temporal Data Mining for Symbolic Time Sequences: Temporal Tree Associate Rules". The algorithm is also explained in this interactive tutorial. This algorithm extracts Temporal association rules from a Symbolic time sequences. The rules can be printed into HTML files, exported into XML files, applied and evaluated on other data-sets. The package also contains an example of data-set to use with the algorithm. You can refer to the TITARL documentation page.

The package also contains an sample data-set (the 20th part of the Computer Generated Data-set), and an example of configuration to extract and display patterns from this dataset.

This release [public release] does not include (yet) the work done in 2013 and 2014 (Aggregating temporal rules, Randomization approach to estimate robustness of association rules, etc.). If you want to access the full release, send me an email.

Event viewer is a small software that allow you to visualize easily time series and time sequences. You can either directly import and visualize your data (e.g. csv files), or you can define a "view". A view is a powerful way to define what and how the data should be displayed. Data from different files can be combined. Since Event viewer is especially designed for time series and time sequences, it can print very large datasets.

The package contains a sample of data. This sample is based on the "Home activities dataset" by Tim van Kasteren, Athanasios Noulas, Gwenn Englebienne and Ben Krose presented in "Accurate Activity Recognition in a Home Setting", and on the learning algorithm presented in "Temporal Data Mining for Symbolic Time Sequences: Temporal Tree Associate Rules".

Event script is a small but high level flow-oriented declarative programming language designed to facilitate the pre/post processing and the analysis of symbolic and numerical time series and sequences datasets. Event Script has been developed since 2010 an applied on a width range of dataset and problems including Medical datasets, Market dataset, hardward monitoring dataset, human activities datasets, etc.

Example of Event Script and its graph.
This script extract hearth beat events from
an EKG continuous signal.
(click to enlarge)

Some of Event script's notable features are:

Machine Learning Lab. (MLL) is a small exploratory tool that gives you the opportunity to plays easily with common machines learning algorithms. MLL creates an interactive webpage where you can select a datasets, algorithms, and see the results of applying this algorithm in the dataset. 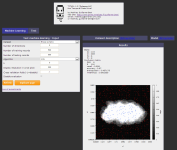 Once your started the program, start your web-browser and open the url http://localhost:2002/.

Several types of evaluation and way to visual the results are proposed:

You can also import your own datasets by dropping your csv files in the "IncludedDatasets" directory. Csv specification: CSV file, comma separated, names on the first line, output value in the last column, all values should be real numbers.